Type in English, Get in Nepali

History Of Nepali Language And Its Importance

Since the creation of greater Nepal, the Nepali language has been popular as an easy means of communication between all language speakers of the nation. Many years before the creation of greater Nepal, the Nepali language had been in use from Bhramhaputra in the east and Kashmir in the west. The linguists have taken the stone inscription of Adityabanshi king Damupal, dating back to 1038 BS, as the official source of Nepali language. A copperplate inscription dating back to 1280 BS is the historical evidence of Krachalya King’s victory over Kedar-land Gadawal to create Sija’s Rigime. After studying the gold inscription of Prithvi Malla of 1413 B.S, we can summarise that the Nepali language came into existence in Gorkha and Gadawal since then. 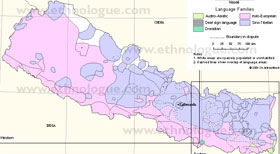 Linguist Balkrishna Pokharel has written that the Nepali Language used in Kirat era until 1382 BS is indicated by Simrangaud king Harisingh Dev’s Pandit Jyotirishwor’s Maithiti book ‘Barnaratnakar.’ Similarly, Bhanubhakta Pokharel writes, "Five-seven hundred years prior to the unification of Nepal, the kings and rulers of the nations in this region relied on Nepali Language for inter-state use as in sending letters, treaties and agreements. Prithvi Narayan Shah, during his unification campaign spanning Baise, Chaubise, Limbuwan, Khumbuwan including Apungi breakaway states, used Nepali Language whenever he had to speak with the monarchs of these states." In this fashion, the Nepali Language gained a status as the inter-caste medium of communication.

There are plenty of archives to indicate that Prithvi Narayan Shah, before unification of Nepal, had used Nepali Language when speaking with Kantipur’s king Laxminarsingh Malla and his son Pratap Malla. There are many evidences that kings Jagat Prakash Malla, Bhupatendra Malla, Bhaskar Malla, Pratap Malla and Jayaprakash Malla used Nepali Language in their correspondence. As Nepali language was already in use among the smaller states before the creation of greater Nepal, it helped Prithvi Narayan Shah in his unification campaign.

Historian Nayaraj Panta has mentioned many evidences to indicate that Nepali language was used in correspondence during the Malla era, many years before the unification campaign got underway. Panta writes, "There is a stone inscription in Bishwonath Temple erected by Bhim Malla in front of Kalbhairav at Hanumandhoka." The stone inscription dating back to Nepal Sambat (Newari calendar year) 761 during the time of Laxminarsingh Malla located at a Dabali at the side of Kathmandu’s big Gantaghar and Makhan Shivalaya is written in Nepali Language. There is a stone inscription in Nepali language that Pratap Malla created at Rani Pokhari in Nepal Sambat 790. The red seal written in Nepali Language by Jagat Prakash Malla in 1585 Sakh S. and Jaya Prakash Mall’s document signed in the name of God as a witness to Prithvi Narayan Shah in 3 Poush 1814 BS mentions, "Kathmandu will not ambush the materials brought from Gorkha, receive the goldsmith coming from Bhot, take the coins brought from Madhes, give Naldum to Kathmandu and do the work of Kathmandu."